Dr. Klaus Volkamer
Weighing Soul Substance– Surprising experiments show that everything from atoms to angels has a weighable soul body 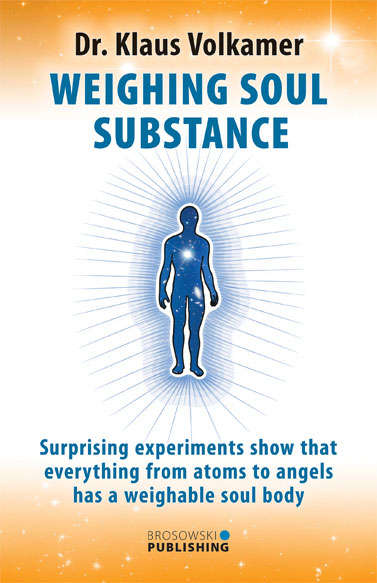 About this book:
Few established scientists have the courage to undertake research on topics outside themainstream. In this book, one of those scientists, Dr. Klaus Volkamer, gives us a sample from 35 years of his research that has led to a new perspective on life and even on inanimate creation. Using highly accurate, automated weighing experiments, Dr. Volkamer has found remarkable weight changes in normal people, healers, meditation practitioners, and individuals showing paranormal abilities.
These weight changes led him to conclude that, in addition to the body that we see, every living being carries a body made of invisible „subtle matter“. This special “field-body” may represent the soul, the aura, or life-force. This subtle matter body appears to act as a “pilot-field“, operating the gross body much as a pilot controlsan airplane. In these experiments, you will see signs of subtle field-bodies in plants, humans, and even in “celestial beings”. Moreover, Dr. Volkamer’s experiments provide evidence that inanimate physical and chemical systems, from crystals to planets and stars, also have subtle field-bodies and that these interact with one another. They all emit and absorb subtle matter fields. This may explain, for example, the long-held notion from astrology that stars influence life on earth.This profound new understanding of individual life and the cosmos supports a new scientific view on paranormal abilities, near-death andout of body experiences, and higher states of human consciousness. It also allows the prediction of the values of physical constants and may explain significant anomalies in modern physics.

From the authors preface:
„It is commonly known that the Greek philosopher Democritus stated about 2500 years ago that all visible matter is composed of atomic particles which cannot be further divided. Not widely known is the fact that Democritus also postulated the existence of an
invisible subtle matter built up of indivisible atoms, and that this invisible matter constitutes the human soul. While Democritus’ atomic hypothesis of ordinary matter is today a fundamental understanding in physics, his second prediction, of an invisible additional form of matter, is unknown to modern science.
Another statement about an invisible substance comes from the  ancient Vedic tradition of knowledge as related by Vedic Master and scholar Maharishi Mahesh Yogi. Maharishi describes the existence of an invisible, semi-liquid form of matter called “Soma”. He mentions two aspects of Soma: first as the carrier of consciousness and second as the building material of the universe. This view suggests the possibility of a scientific bridge between consciousness and physics.
These statements from classical Greece and ancient India inspired the research program to experimentally verify invisible matter that is reported in this book….“