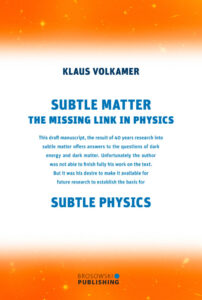 About this book:
This draft manuscript of Dr. Volkamer, the result of 40 years research into subtle matter is the basis for a new subtle physics and his legacy for further research. Unfortunately the author was not able to finish fully his work on the text. But it was his desire to make it available for future research into subtle matter.
Using ultra precise weighing technologies he has proven the existence of a subtle matter that permeates and enlivens the universe. His experiments have been able to measure dark energy and dark matter as two previously unknown categories of subtle matter. He also detected changes in the mass of people and objects resulting from only mental activity, proving that our thoughts produce physical changes in us and the world around us. This discovery opens new possibilities for improving humanity and our environment. Volkamer’s work is a major contribution to science and society.
In the language of modern physics the detected subtle “field-like matter” is termed either as “dark energy” (being subtle matter with a negative sign) and “dark matter” (comprising subtle matter with a positive sign). In the language of psychology these forms of matter seem to be exponents of consciousness. But all results of the presented research point to a realm that the origin of consciousness has been detected, a long-standing mystery of modern science has thus been lifted.
A solid bridge has been established, to connect the materialistic world which has been objectively scrutinized by modern science in great detail (and has been technically applied worldwide) with the so far secret realm of subjectivity, i.e. consciousness. Because modern science has revealed that dark energy and dark matter comprise together about 96 % of the universal mass, it becomes obvious that consciousness in the forms of dark energy and dark matter permeates the Universe. Consciousness not only permeates the Universe, it governs furthermore its large scale structures. This is because, the mass of consciousness, i.e. of dark energy and dark matter, lead by its gravitational interactions on the one hand to the accelerated expansion of the Universe (as a result of 73 % of the dark energy content ranging through the Universe), and on the other hand, to the formation of galaxies within the Universe (as a consequence of about 23 % or dark matter within the Universe). Because it turns out, that normal matter, with a content of only about 4 % of universal mass, emerges from effects of subtle matter, we come to the surprising, but experimentally very well documented conclusion, that the Universe is dominated by effects of consciousness by 100 %, yielding a new reality of a “living Universe”.